As you read it.

It seems like a blog post is well overdue.
The last post was in January, what have I done since then, mostly got a book out and done some performance pieces.

There is a spoken word event at Malvern each year called “As you read it” As far as I can see anyone can submit a piece so long as it takes about 10 minutes to read and it is has never been published before. I entered a somewhat amusing piece called Cinderella and Goldilocks, a sort of imaginary  gossip between the two of them picking over their own careers and commenting on a few other fairy tale characters. I would print it here, except that it is going to be in an anthology shortly, so I’ll go on about it then. 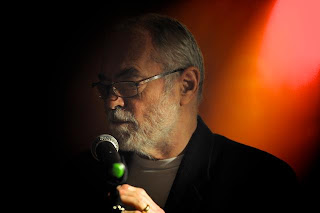 I was lucky enough to be one of the final eight writers who were invited to read their piece. The event takes place in one of the big Malvern theatres, a room that could take several hundred in the audience, though nothing like that many turned up.
The event is done in a very theatrical way – you have to wait in a dressing room until your call, you have to rehearse the day before, and you end up on a stage bathed in a thousand watt super trouper so you can’t see the audience.
The nearest listeners were about 30 feet away and any sound from them was almost lost in the vast space of the theatre. I could just about make out polite titters in the right places.
I read the piece again, for a smaller and more intimate audience at 42,[ http://on.fb.me/ZxDCPr] an event in Worcester (named in honour of Douglas Adams’ answer to life the universe and everything)  They laughed a lot louder. The somewhat atmospheric picture, taken by Geoff Robinson, is me reading at 42.
Posted by rodgriff at 15:19