Despite previously blogging to the effect that I was not going to do the NaNoWriMo thing; this year I am. My original plan was to be doing it in my motorhome somewhere near a beach in southern Spain, but what with one thing and another I'm still in Worcestershire.
Why do it? mostly because I had an idea, that's not so unusual, but if that idea gets connected with a character in my mind, and the character likes it, or at least reacts to it, then the next step is the keyboard.

There are some disadvantages, one being that 50,000 words is classed at success, 50,000 during November, that is. It's not the number that I object to, it's the mesmeric quality of a target.
If you join the web site, and fill in your totals now and again they ping up this nice graph that shows how you are doing. One becomes captured by the numbers. I have no idea how long this novel really should be, maybe 49,000, maybe 63,000, but there is every likelihood that by the end of November it will be 50,000. Given that most agents and publishers seem to expect adult novels to be in the 60,000 - 80,000 range, there is a sort of flaw in the NaNo concept, unless the Nano bit is about it being a small novel, or possibly it is a cunning ploy to keep most of this rubbish away from traditional publishing.
Anyway, there is it. About when we should have set off to Spain the area we had intended to head for had major floods, one of the contributing factors to not going, though there were others.
Right now, outside my window, the river Severn is over it's banks and as high as I have ever seen it since we moved here.

In 2007, in our old house we once had a major flood, (see picture, right). There is something reassuring about being able to  stand on my roof terrace in the new flat, and look at the water (see below), and think that it would take an unimaginable catastrophe for the water to get this high. 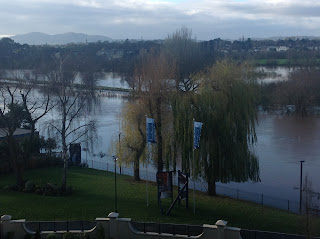 The novel is not about floods, it's much more scary than that, but I must get back to it, the numbers are calling.

Posted by rodgriff at 14:11 No comments:

Wake up Mr Cameron
My mother did not vote in the PCC election. I should say right away that this is the first election, ever, that she has not voted, and she is 89. My mother was a policewoman during the war, she is one of the most upright, law abiding and effective people that I have ever known. For many years she ran her own business. Since retirement she has spend thousands of hours doing voluntary work, serving in charity shops, driving infirm people to hospital, helping man phones in the local voluntary centre, in fact generally being a model citizen.
So why did she not vote? Because she knew nothing at all about the election or the candidates. How come? Because she had received no information through her post box, heard nothing from any of the candidates and does not use the Internet. As a result she had no way of finding anything out.
What was completely remarkable about this election was that if you don't use the Internet then you had no chance of playing your part as a citizen. In some ways I think it is reasonable to expect the Internet to play a big part in our lives, but to make it essential seems to be going a bit far without actually asking people if that was OK.
For some time I have had a theoretical objection to the TV license, in the back of my mind, because it means that in order to listen to party political political broadcasts, or to listen to the Queen or the prime minister, you have to pay to be able to receive TV. However, there was still the possibility of listening to the radio, so if you did not want to pay to receive TV you were not completely cut off.
This election has gone a lot further.
There is also another somewhat unfortunate aspect, the actual web site was rubbish, as is the result service. I can find out from the PCC site, who got elected, but they have not published the percentages. I can read about the low turnout all over the place, but I don't get the official data, from the place I voted.
This is not democracy in action. For institutions to exist in a decent society, not only must they act in a proper way, but they must be seen to do so. Were they trying to convince us that policing only matters to those who use the Internet?
All I can say is Dear Mr Cameron, wake up. If you stop treating me like an idiot, I might stop thinking you are one.

Posted by rodgriff at 08:26 No comments:


The events at the BBC are quite extraordinary, yet somehow depressingly predictable.
Obviously many people are shocked by the allegations made about Jimmy Saville, but they are still allegations. They are being investigated by the police, and if he were alive one can be sure that his lawyers would have been issuing injunctions by now to suppress some of the press coverage in the hope of ensuring that he got a fair trial.
Perhaps because he is dead, perhaps because there are so many allegations, perhaps because some people did find him "creepy", we seem to have forgotten the need for due process.
Unfortunately what seems to have happened next is that the lack of normal process in the Saville case has led the media into a frenzy of thinking that trial by media is OK. That is is reasonable to put unsubstantiated allegations on TV, or repeat them on TV and in the media, without due process.
Whatever the truth of any of these allegations it will be a very bad thing if we abandon due process.
I'm not a lawyer, in fact I have to say that lawyers mostly annoy me, there are too many of them, they charge too much and they seem to promote a narrow view of the world. Nevertheless there are good reasons why we have a police force, a crown prosecution service, courts, juries and judges, and they are all independent of each other in a system that has evolved over centuries. TV programmes and newspapers and the internet are not a substitute.
The legal process may get things wrong from time to time, but if it does, there are appeals and mechanisms to secure redress. If we resort to the media and the Internet as an alternative, there is no appeal or redress and we will end up with a much more unfair society. We have only to look at the tragic cases of people killing themselves because they have been attacked on the web to see the extremes that are possible. As a society I'm sure we don't need more of that sort of thing, and I am prepared to put up with a few lawyers in order to ensure that.
If Jimmy Saville's alleged activities, and the fall out from revelations about them, end up undermining a fair society as well as apparently abusing children, then he really will have fixed us.

Posted by rodgriff at 10:05 No comments: