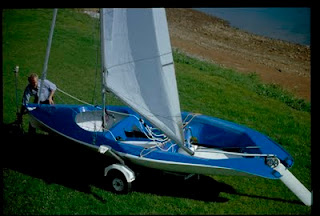 In March I mentioned a boat, a dinghy called Spearhead, that I helped design many years ago. Two of them have been sitting on my back yard for the last decade, sailing very occasionally.
One has now gone to a new home. After a couple of weeks of refurbishment, we got it sailing. Not as dramatic an event as we might have liked because there was no wind but it did ghost along. We now have the other one on Ebay.
So, as a digression from my normal obsessions, here is a little of the history of the boat and what makes it special. 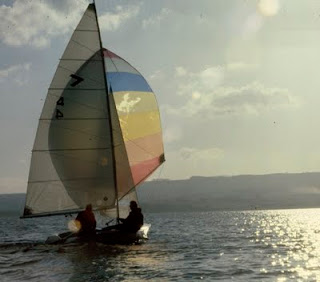 The project started out when my father was measurer for the 5o5 world championships. (For those of you who don’t know about such things, that is a class of sailing dinghy, five point O five meters long). The measurer has to make sure that all the boats are the same, so inevitably by the end of the week we knew all the ways that people tried to cheat in order to make the boats go a bit faster.
Flatter and longer with a deeper point to the bow seemed to be the main things and make it lighter if you can. In a 5o5 all those things are illegal, but what about making a new class? 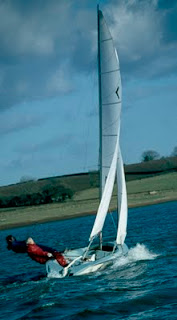 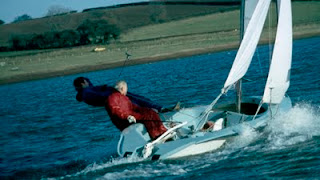 Making a boat lighter, calls for some engineering innovation. In a sailing boat, there are forces at work that will break the hull. Start with the mast, it’s not difficult to see that this produces a downward pressure on the bottom of the boat which would make a hole and sink it. Normally the boat has extra thickening to resist this, but that adds weight. When the wind blows on the sail it pushes the mast sideways, so we resist that with side stays, but they pull the sides of the boat inwards. Also, if you do that maths and triangulate the forces, you will see that tightening the side stays also pulls the mast downwards even harder. Actually, it is all in three dimensions, and some of the force goes through the forestay and that too can deform the hull. 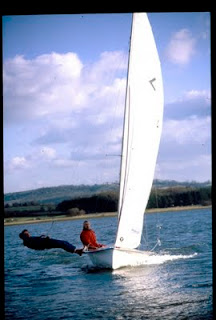 The solution to all this came to me lying in bed one night. A triangular aluminium tube frame fitted under the foredeck from which the mast could be suspended. The stays are attached to the frame so that all the rigging forces are contained. The whole thing weights about 10 pounds and because aluminium is light and the arrangement is very efficient, it allowed us to reduce the weight of the hull by about 80 pounds compared to a similar sized racing dinghy.
The rest of the boat was also packed with innovations. The deck was made in one big moulding, using epoxy resin for the fibreglass because that is stronger weight for weight than the more traditional polyester resins that were traditional at the time. We had a theory that by taking a lot of the stress out of the shell and into the frame system the boat would last a lot longer. Thirty odd years later I can say that we were right, not many wood or fibreglass dinghies last as well. 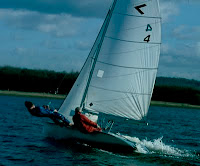 We created the shape by working in a big shed with a trapeze wire hung from the roof. We spend hours sliding in and out, simulating the movements that would be required when sailing. We gradually built up the shape with car body filler, sandpapering and polishing until we had something we could move around with ease. From that plug, we made a mould so that the whole deck of the boat could be cast as a single entity and dropped onto the hull.
The result, as you can see from the pictures, looks more like a modern racing car than a traditional boat. Of course, they make the cars out of carbon fibre, which would have been nice, and even lighter but we weren’t millionaires.
Why did we call it Spearhead?
Because the shape of the wetted area when it floats looks like a spearhead, well, it would if you were swimming underneath. There are other clever things about the design, on which I could bore for England, but I’ll save those for anyone who asks.
I’m getting too arthritic for cold-water sports, and all the team that built the boats are dead now, apart from me. This is the last one left in the family after free cycle locally found a home for my old boat, so I’m writing this in the hope that we can find a good home for a piece of history that, as the pictures show, is also a load of fun
Posted by rodgriff at 12:49